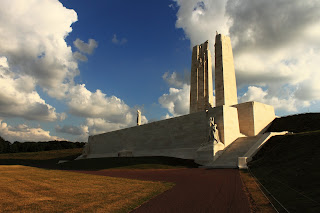 "The Battle of Vimy Ridge was a military engagement fought primarily as part of the Battle of Arras, in the Nord-Pas-de-Calais region of France, during World War I. The main combatants were the Canadian Corps, of four divisions, against three divisions of the German Sixth Army. The battle, which took place from 9 to 12 April 1917, was part of the opening phase of the British-led Battle of Arras, a diversionary attack for the French Nivelle Offensive.

Historians attribute the success of the Canadian Corps in capturing the ridge to a mixture of technical and tactical innovation, meticulous planning, powerful artillery support and extensive training, as well as the failure of the German Sixth Army to properly apply the new German defensive doctrine. The battle was the first occasion when all four divisions of the Canadian Expeditionary Force participated in a battle together and thus became a Canadian nationalistic symbol of achievement and sacrifice. A 91 ha (220 acres) portion of the former battleground serves as a preserved memorial park and site of the Canadian National Vimy Memorial.[5]"

"By nightfall on 12 April 1917, the Canadian Corps was in firm control of the ridge. The corps suffered 10,602 casualties: 3,598 killed and 7,004 wounded.[3] The German Sixth Army suffered an unknown number of casualties with approximately 4,000 men becoming prisoners of war.[113][Note 6] Four members of the Canadian Corps received Victoria Crosses, the highest military decoration awarded to British and Commonwealth forces for valour, for their actions during the battle..."


(Both are quotes from this Wikipedia article  http://en.wikipedia.org/wiki/Battle_of_Vimy_Ridge)


Linking to the Hip Homeschool Hop today.
Posted by Jacqueline at 16:49