Homeschooling at Last - School or Education? 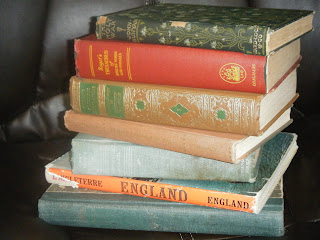 Now that we are back to homeschooling (yes, I know it's almost the end of the year, but that's another story), I wanted to share a little on my philosophy of homeschooling.

When we first started homeschooling (for PreK when my daughter was 4), I had the idea in my head that homeschooling was "school-at-home" rather than "learning-at-home".  That first year, we were pretty informal, just using a workbook for letters, colours, etc and doing lots of activities, crafts and exploring.  All that year, though, I kept thinking, "We're REALLY going to do school next year!"  The house we were living in at the time had a spare bedroom that could be transformed into a classroom (just like a "real" school).  I was going to be the best Kindergarten teacher ever!  We were going to learn our national anthem by singing it every morning.  We were going to do art projects and science experiments.  We were going to have fun, fun, fun!  It was going to be a great year.

Then the wheels fell off.  My daughter suddenly realised that she didn't want to sit and listen for an hour (or more) five days a week and that playing was a lot more fun than school.  A power struggle developed between us and I ended up having to call in the principal (my husband!).  It seems a little silly now looking back, but at that time I was ready to throw in the towel because it wasn't how I had pictured it.  After a lot of struggle and prayer and a switch in curriculum, things kind of evened out and we made it through the rest of the year.

I think the biggest lesson I learned was to not confuse school and education.  They are not necessarily the same thing.  You can go to school and NOT be educated, and you can NOT go to school and still be educated.  I think I kind of knew this before, but I failed to apply it to homeschooling because of the pressure homeschoolers are under ( like the mindset that you have to be doing exactly what the public school is teaching or your kids will be "behind" or not learning or whatever).  When I think of all the things I learned simply by reading, I am amazed.  I was (and still am) a voracious reader.  As a kid, I used to take a dictionary or volume of encyclopedia and read it like a novel (I am such a nerd, I know).  Some of that stuff has stuck with me much better than a lot of things I learned at "school".  My first year of high school, Level One (Grade 7), I had to take Geography.  I detested that class.  It made me feel stupid and I didn't understand a lot of what was being taught.  It was the first school subject I was ever in danger of failing.  I couldn't do the assignments correctly and I was really frustrated.  I gave up after a while (it was a tough year for me in many ways) and just started reading the textbook over and over.  Since I knew the book, I was able to get through the Quebec Ministry of Education exams that made the classwork worth very little and I passed the class.

To sum up this post, school does not equal education.  A "school" can provide an education, but education is not something exclusively found in institutions of learning.  I'd like to leave you with some examples of people who prove my point:


A Few Famous People Who Were Home Educated


Thank you for reading my blog!  I would love to read any comments you might have on this post or any of my posts.
Posted by Jacqueline at 16:10

Email ThisBlogThis!Share to TwitterShare to FacebookShare to Pinterest
Labels: homeschooling

I loved this post! If you want to get more followers and such let me know and I will try to help you. You seem like my kind of person.