I saw this tutorial on how to crochet flowers and I thought they would be really great to use on my cards.  They were so pretty and the dear lady showed how easy they were to make.  One problem - no crochet hook and I had never crocheted in my life.  Then yesterday, when I was at the mall getting a new mat for my porch to replace the one the cat destroyed (long story), I noticed they had a bunch of sewing/knitting/crocheting stuff marked way down.  There was the perfect little crochet hook for only 69 cents!  So I bought it in great anticipation of making marvelous flowers...

While I was waiting for my bread to bake this afternoon, I thought I would try out my new crochet hook.  I fired up the video tutorial and began to create.  After several attempts (and much rewinding), this is what I produced: 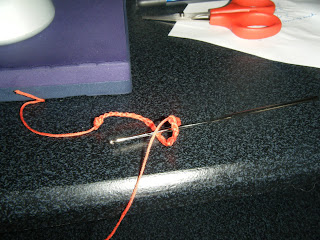 Somehow it doesn't look much like a flower.  I don't know what I did wrong - I was trying to follow her as she skillfully stitched away.  If I ever happen to need a tieback for an orange curtain, I've made a good start on it.  ;)
Posted by Jacqueline at 18:05

You didn't make it into a loop, after 6 stitches you hook the first stitch together with the last. I will have to give this a try someday